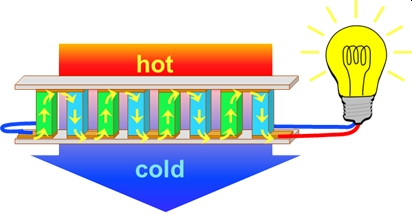 A Thermoelectric Generator (TEG) are heat engines that are based on a direct conversion of a heat flux into an electrical current. They consist of at least one thermoelectric device (TED), heat exchangers on the hot and the cold side of the TED as well as power electronics to manage the output power.

A TED consists in this case itself of several hundreds of thermocouples connected in series to optimize the generated voltage. Relatively high voltages are beneficial for TEG applications, otherwise, a high current would generate a loss of power by increased Joule heating. Several TEDs can be connected in series or parallel in order to optimize the current to voltage ratio with respect to the power electronics. A maximum performance of a TEG is obtained if an electrical AND thermal impedance matching is realized. Therefore, the design of the heat exchangers on the hot and the cold side as well as the maximum power point tracker are of major importance for applications. The optimum thermoelectric materials used in a TEG should have a high mean ZT value in the temperature range applied to the TED, which may differ from the temperatures of the heat source and of the heat sink.

A TEG can be called a “thermal battery” as it provides a constant DC current for a constant heat flux which means a constant temperature difference across the TEG. If the heat source temperatures or the cold side temperatures vary with time than the the voltage is changing. In order to get the maximum attainable output power for each condition a power electronic management with a Maximum Power Point Tracker (MPPT) like for solar panels is needed. An electronic power converter provides the adjusted DC or AC voltage for the electric load.

Pros & Cons: TEGs are less bulky than other heat engines and can be integrated directly in the heat exchangers. They have no moving parts, are silent in operation and produce no vibrations. A major advantage is their being maintenance-free, with very long lifetimes (>40 years are demonstrated by the TEG in the space probe Voyager 1 & 2). Although the power to weight ratio is very good, the efficiency is low compared to other heat engines. 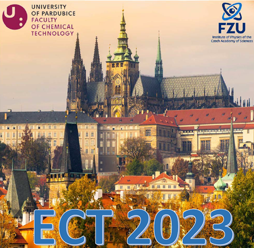 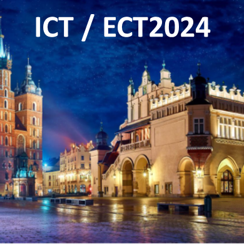